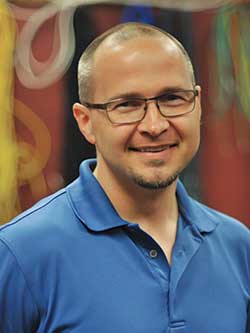 Aaron grew up in Southwest Wisconsin and then attended college at Alexandria, Minnesota. After college he acquired his first after college job at ABS Global in DeForest, Wisconsin. He worked on with an AS/400 environment networked with Novell and token-ring architecture. He also assisted with the AT&T PBX telephone system.

Aaron then moved to Las Vegas to work for the Stratosphere Hotel and Casino. There he had the responsibility of administering the 3 main servers; Hotel, Casino and Administration. He received experience with a 24 hour industry while working on one of the first diskless workstation Novell environments.

Aaron was then offered a Networking position at the Las Vegas Cable Television company, Prime Cable, which was acquired by Cox Communications, Incorporated shortly after he was hired. At Cox, Aaron was responsible for the company's infrastructure and assisted with the deployment and design of one of the country's first cable modem ISP networks. Aaron was also the Backup Administrator for the Broadband Delivery System Administrator, who was responsible for the Digital Cable TV network.

Aaron has been working for Southwest Wisconsin Technical College for 7 years now. He has modified the curriculum for the IT – Network Communications Specialist program so as to integrated Voice Over IP, wireless and video systems into the program, created a new courses in Information Security and Linux Administration.